TEASER:
The episode begins exactly where the Season 14 Finale ended: Dean, Sam, and Castiel are in a graveyard under attack by a hoard of the recently-risen undead (being animated by souls from hell). After the trio tries to fight the creatures off for a few moments, Castiel hastily picks Jack’s dead body from the ground and the group runs to the nearest shelter – a crypt.

EPISODE:
Once inside the crypt, the Winchesters bar the door with iron to hopefully keep the creatures outside. As the creatures snarl, growl and pound at the door, Castiel lays Jack’s body down on the floor, and the brothers check the crypt for access points or a way out.

Dean and Sam ask Castiel if he can resurrect jack, but Cas says he can’t. As the group discusses their situation, they surmise that the creatures aren’t zombies. Instead, they think that when Chuck sprung all those souls from hell, the souls merely possessed the closest bodies.
While searching for a way out, Sam hears running water on the other side of a brick wall. The brothers think they may be able to escape through a sewer line; but when they break through, another creature crawls through the opening. Castiel kills the creature and the group realizes that there is no way out of the crypt.
As this is happening, Jack’s body stands up and says “hello”. During a tense discussion, the group learns that a demon named Belphegor has possessed Jack’s body. The demon says he wanted to “blend in” with humanity, but the other nearby vessels were too decomposed for that. Dean, Sam, and Cas are furious initially, but when the demon says that he can help them escape from the crypt, they agree to accept his help.
Belphegor tells the group that he knows who they are, and when he asks how the souls were released from hell, they tell him that Chuck did it. Belphegor reveals that he worked a menial job in hell, but he’s not interested in killing people now that he’s on earth. Instead he says that he wants hell to return to the way it was, which includes returning the loose souls to hell. He tries to convince the group that he wants the same thing they do, so they should work together.
Belphegor works a spell (using graveyard dirt and angel blood) to blast the souls out of the corpses. As soon as he completes the spell, the pounding on the door stops and all seems silent. When the group ventures outside, they see dozens of bodies lying on the ground, once again dead. Dean asks where the souls went…
Elsewhere, in Harlan, Kansas (presumably near the cemetery), two adolescent girls are in a bedroom playing dress up, experimenting with makeup and jewelry. When one of the girls walks by a mirror, we see Bloody Maryappear in the mirror. Eventually, she attacks the girls. 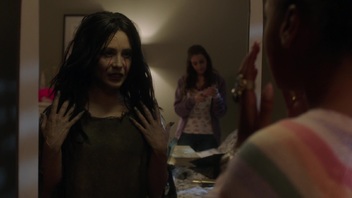 Later the same night, the Winchesters, Castiel and Belphegor are in the Impala, heading toward the bunker. Using his phone, Sam checks the internet for any evidence of nearby paranormal (or zombie) activity, but doesn’t find anything. As the group is talking, Belphegor reveals that there are likely 2 to 3 billion souls in hell. He suggests that they try to contain the ghosts until they can come up with a better plan. He says he knows a spell that can create a mile-wide salt circle that won’t allow any ghosts in or out. Cas says that the nearest town, Harlan, Kansas, is less than a mile from the cemetery, so if they create the circle, people will be trapped inside. Dean suggests that they evacuate the town first, then work the spell to contain the ghosts.As the group is driving, they come across an abandoned car by the roadside. The car doors are open, the radio is playing, and the windows are splattered with blood, but there’s nobody inside. The brothers recognize the car as the scenario they encountered when they hunted a Woman in White. They also realize that if she is free from hell, then so are all the other vengeful spirits they’ve sent to hell. Realizing there’s nothing much they can do, they return to the Impala and head into town.

Meanwhile, in town, a woman is holding a young girl and frantically racing through a house. There are party balloons, cake, and other items suggesting a birthday party was interrupted. There’s also blood splattered on walls, floors, and elsewhere indicating that something violent has happened. The woman and girl make it into a garage and close the door. The woman tries to get out, but the garage door is locked, so they can’t get out. As the woman searches for a way out, maniacal laughter can be heard close by. Soon, we see that they are hiding from the ghost of John Wayne Gacy. The woman and child find a place to hide in the garage as we see Gacy’s ghost enter and look for them. 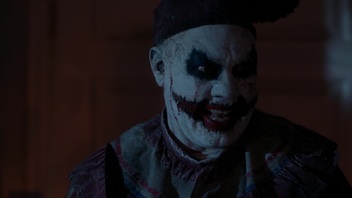 THE NEXT DAY
The next morning, the Winchesters arrive in town, dressed as feds. They find the sheriff and convince him that there’s a nearby chemical leak and the town needs to be evacuated. The sheriff agrees to evacuate everyone to a nearby high school (which is five miles away and outside the perimeter for the spell). Dean and Belphegor agree to find the ingredients and work the spell, while Sam and Castiel work with the sheriff to evacuate the town.

DEAN and BELPHEGOR
While Dean and Belphegor are alone, they have an awkward conversation about who jack was and how the world has changed since the last time Belphegor was here -- apparently it was a long time. Belphegor says that the ingredients for the spell are a large amount of salt and a human heart.

CASTIEL and SAM
Meanwhile, Castiel and Sam, armed with shotguns (and salt rounds) sweep the town for ghosts. Castiel finds the house where Bloody Mary killed the two girls, and Sam finds the woman and child hiding from John Gacy’sghost in the garage of another house.

Before Castiel and Sam can get the woman and child to safety, Sam gets injured by Gacy’s ghost, but Castiel heals him. Cas also tries to heal Sam’s wound from when he shot Chuck, but it doesn’t work. Instead, Sam (and possibly Castiel) gets a disturbing vision of Sam (possibly with black eyes) and Dean, who is apparently injured and begging Sam to do something. The vision ends abruptly, and Sam tries to ignore it.

Sam gets a phone call from the sheriff, telling him that the rest of the town has been searched and is evacuated. He agrees to go to the high school and wait for the agents. Cas and Sam try to get the woman and child to safety, but the ghosts (along with others) all attack them. Initially, they try to fight using the shot guns, but eventually they just run… 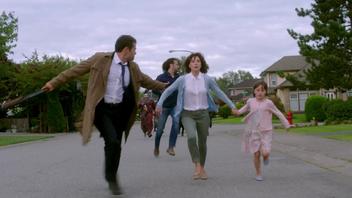 DEAN and BELPHEGOR
Elsewhere in town, Belphegor reminds Dean that he needs a large amount of salt and a human heart – preferably a fresh one -- to work the spell. Dean gets a large bag of rock salt from a hardware store. As he heads back to Belphegor, Dean uses his cell phone to call Rowena. He explains the situation with Chuck, and tells her that they need her help. After he hangs up, he and Belphegor talk briefly. Belphegor tells Dean that he admires him from his time in hell, when Dean was torturing souls with Alistair. Dean brushes off the “compliment” and they discuss hell. Belphegor tells Dean that hell was business as usual, but suddenly all the doors were opened up and souls were allowed to escape. When Dean asks about the cage, Belphegor tells him that the cage opened up too, so Michael may have been freed.

They return to the task at hand, but before they can find a heart, they hear a scream. They race toward the sound and discover that the Woman in White has attacked and killed the sheriff. Belphegor takes the sheriff’s heart from his dead body and begins working the spell. As this is happening, the Woman in White attacks Dean and temporarily knocks him out. Before Belphegor is seriously injured, Dean regains consciousness and dispatches the ghost.
Belphegor uses a large pile of salt and the fresh heart to work his spell. The spell creates a bright, orange force field that expands from Belphegor’s location fanning outward.
In another part of town, Sam and Castiel are running with the woman and child. They see the orange force field and realize that the spell is working. They race to the edge of the threshold and cross over, just ahead of the ghosts. When the ghosts hit the force field, they can’t cross over and Sam and Castiel realize that the spell has worked and the ghosts are trapped.

EPILOGUE:
The Winchesters, Castiel, Belphegor, and the woman and child arrive at the high school where the rest of the town’s inhabitants have gathered. The child thanks the group for their help and the woman agrees to not say anything about what they witnessed.

Once Dean and Sam are alone, Dean tries to tend Sam’s wound but realizes that there’s no exit wound and no bullet inside. He cleans the wound with antiseptic and the brothers talk about their situation. The brothers agree that they only have a few days to clean up the town and decide on their next move. They discuss how Chuck has been “playing them” and making them believe that they had free will. Dean is angry because he believes that all the good they’ve done in their lives doesn’t mean anything. Sam insists that the people they saved are still alive, so all their work wasn’t for nothing. Sam also believes that Chuck is gone now and from this point forward their destiny is their own. 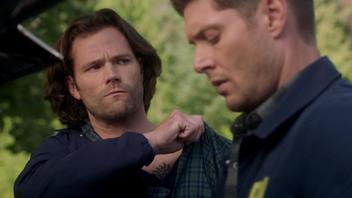 The brothers discuss how they have a few billion ghosts/souls to deal with, and in a now-famous, iconic camera shot, the brothers close the trunk of the Impala and say that they have work to do.