TEASER: Black Forest, Colorado
Three young women are on a camping trip. They’re inside a tent drinking spiced rum and talking. All of the women have recently graduated from college; two of them have already found jobs, but the third laments that she doesn’t have a real job yet. As she’s talking, she hears a noise outside the tent. The other two women dismiss the noise, saying it’s probably a deer.

As proof that she isn’t afraid, one woman from the group goes outside the tent to get more rum. The other two girls hear her scream. Frightened, the second woman gets up to zip the tent closed, but something snatches her outside and she also screams. The third woman screams and the scene fades to black. 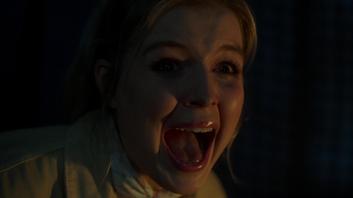 EPISODE:
At the bunker, Sam is checking his phone messages. He sees several unanswered text messages that he’s sent to Castiel. From the messages, it’s clear that Sam didn’t know Cas was leaving and he just wants to make sure Cas is alright. 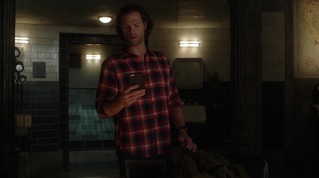 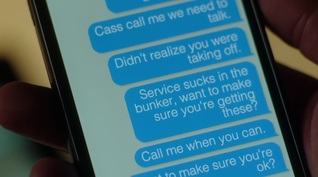 Dean returns and, after a few moments of banter, he and Sam read about five people who have been attacked by “mountain lions” in Colorado. They agree to investigate.
During the drive to Colorado, Sam falls asleep and has another nightmare. In this one, he is wearing the white suit he wore in The End when he was Lucifer’s vessel. Dean shoots him in the head with the Colt, but it doesn’t kill Sam, so Sam sets Dean on fire, burning him to death. 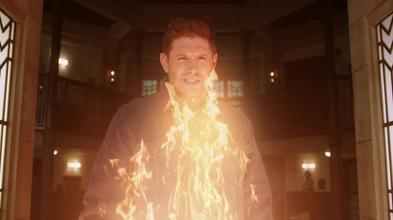 Sam suddenly wakes up from his nightmare, and although Dean wants him to talk about his dream, Sam refuses.
The next day, Dean and Sam arrive in Black Forest, Colorado. Posing as agents from the U.S. Fish and Wildlife Service, they question the sheriff about the attacks. The sheriff tells them about the most recent incident, in which two women were killed (had their hearts ripped out), but one survived. The surviving woman, Ashley Monroe, is in the hospital being treated for shock. 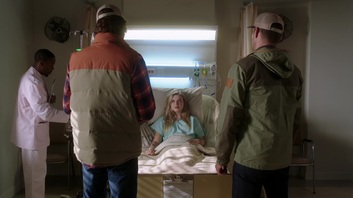 Dean and Sam question Ashley in the hospital. When Sam steps outside the room to question a nurse, Ashley speaks privately with Dean. Ashley reveals that the person who attacked them had fangs and long claws. He chased her through the woods and cut her face with one of his claws. He also told her that if she revealed anything about him or the attack, he’d return and kill her. Dean tells Ashley that the man was a werewolf. 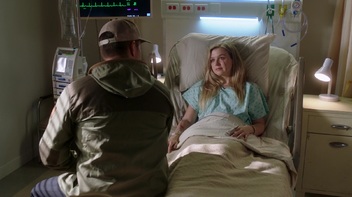 Despite Ashley’s initial disbelief, Dean eventually convinces her that he and Sam hunt monsters, and if she cooperates with them, they’ll keep her safe and kill the monster. Ashley tells Dean the man’s name (Andy May), and he and Sam track down an address.

Later that day, Dean and Sam arrive at a cabin in the woods and question the inhabitants, who are two brothers (Andy and Josh May). 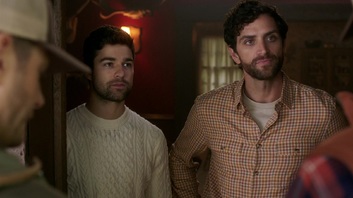 During the interview, the two men behave suspiciously. They also refuse to touch a silver pen when Dean asks them to write down their phone numbers so they can be reached later. Andy instead replies that they don’t have a telephone.
Once the Winchesters are outside the cabin, they seem convinced that the men are werewolves. They are prepared to kill the creatures, but Dean suddenly gets an emergency phone call from Ashley, so they leave.
Once the Winchesters are gone, the werewolf brothers argue. Apparently, Josh killed Ashley’s two friends and thought Andy had killed the third camper. Andy disagrees with killing people anyway, but Josh says he’ll stop. Josh berates Andy for leaving a witness alive, and convinces him that they have to kill Ashley before she exposes their identity.Later that night, Dean and Sam arrive at their motel with Ashley. Apparently, Ashley called Dean because she was afraid to go home, so the Winchesters agree to let her stay with them until she is out of danger. They agree to get a room close to hers, but Ashley asks Dean if he’ll stay until she falls asleep. Dean agrees to stay temporarily, while Sam goes to another room.While Ashley is getting settled, Sam mentions how odd and “easy” the case has gone; but Dean dismisses Sam’s concern. 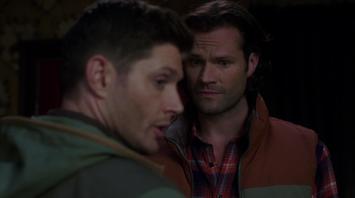 Meanwhile, outside the motel, the werewolf brothers have arrived in their truck. They know Ashley is inside because of her scent; and they recognize the Impala parked outside, so they know the Winchesters are also inside. They agree to go in quickly and quietly and get the girl.

In the motel room, Ashley and Dean talk. When Ashley asks Dean if he likes his work, Dean says he does because although there’s a lot of bad, he gets to help people. Ashley laments (again) how she doesn’t know where her life is going or what she wants to do. When she comments that her life is too random, and it might be better for her if her life was all planned out, Dean disagrees, but doesn’t offer an explanation. Ashley settles back and falls asleep.

Suddenly, over four hours have passed. Dean is asleep when Sam returns. Ashley is gone, and the door is open. When Sam asks what happened, Dean is confused and can’t remember falling asleep. They realize that the May brothers have taken Ashley, so they rush back to the cabin. 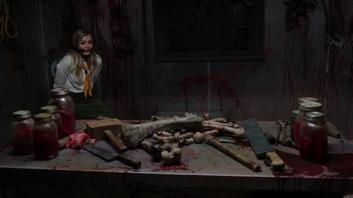 At the cabin, Ashley is gagged and tied to a chair in a room that looks like a butcher's room. Nearby, Josh and Andy are arguing again. Andy doesn’t want to kill Ashley, but Josh insists this is who they are. Josh and Andy are preparing to kill Ashley when the Winchesters burst in.
Dean and Sam free Ashley and fight the werewolves, but the Winchesters are overpowered. During the fight, Sam drops his gun and Andy picks it up and points it at Sam. However, as this is happening, Andy notices that Josh is preparing to kill Dean, so Andy shoots his brother. Andy explains to Dean and Sam that his brother was a monster, so he didn’t have a choice. Then Andy says he’s also a monster, and he shoots himself and falls dead onto the floor.
Dean tries to lead Ashley out of the cabin, but she’s freaked out and shoves him away. Her momentum forces her backwards and she falls on the floor, impaling herself on a rack of deer antlers.
The Winchesters are initially shocked, but they are even more shocked when Ashley stands up, unharmed, pushes the antlers out of her body, and begins talking to them. When the Winchesters demand to know what Ashley is, her eyes roll upward and the brothers see they are white. Ashley is Lilith! 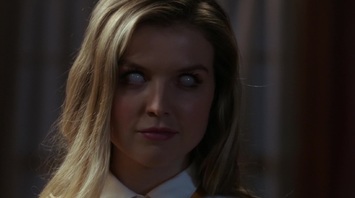 When the brothers demand to know how Lilith is alive, she tells them that Chuck resurrected her from the Empty to do his bidding. She tells them that Chuck is writing a story about them, and she is part of it. She was supposed to be rescued and seduce Dean, but now they are off track. She says she’s the one who put Dean to sleep so that part of the story would play out as intended.

When Sam asks Lilith if Chuck sent her to kill them, she reveals that killing them is not part of this story. Instead, she is supposed to find the Equalizer. When the brothers refuse to tell her where it is, Lilith knocks Sam unconscious and tells Dean she’ll kill Sam if he doesn’t tell her where the weapon is. Dean agrees to take her to the Equalizer, and they leave together, leaving Sam lying unconscious on the floor.While Sam is unconscious, he has another dream. In this one, DemonDean attacks and kills him. Sam wakes up suddenly and realizes that Dean is gone. He steals the May’s truck and rushes back to the motel.

Meanwhile, Dean and Lilith are in the Impala driving back to the motel. Lilith says that she gave her life to resurrect Lucifer – a mission she believed in. She says she’s not happy to be back, but since she can’t hurt Chuck, she’ll hurt Dean and Sam instead. She argues that Chuck is a bad writer and the current story is stupid, but she still must play along. She also says that all of Chuck’s stories end the same way – with one Winchester brother killing the other. 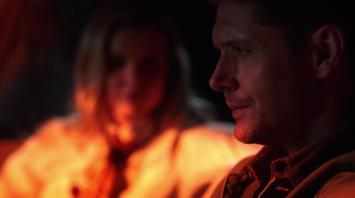 Eventually, Dean and Lilith arrive back at the motel room and Dean stalls for time. When Lilith realizes the weapon isn’t in the room, she begins torturing Dean, cutting his face to get him to reveal the location of the weapon. Before this can get too far, Sam bursts in and there’s another fight. Lilith realizes the Equalizer is in the Impala, so she uses her powers to freeze the Winchesters in place, finds the weapon, and melts it down to a puddle of metal. Then, she disappears.

EPILOGUE:
Back at the bunker, Dean and Sam discuss their situation. Sam has tried unsuccessfully to reach Cas, but Dean says Sam has warned Cas about Chuck and Lilith, so there’s not much more they can do. Dean laments the fact that Chuck is still writing their story, and in every one of his endings, one of them kills the other. Sam reveals that all his nightmares have been the same thing – a horrible scenario in which one brother goes evil and kills the other. The brothers surmise that Sam’s wound has somehow linked him to Chuck, so Sam can see some of what Chuck is writing – or at least the endings of his stories. 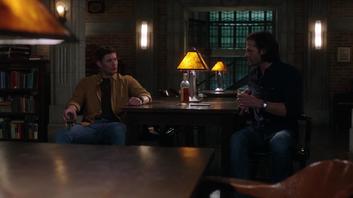 The brothers agree that neither of them knows what to do, but they won’t stop fighting.