Angelology is the study of Angels it comes’ from the Greek word “Angelologia” which is a combination of two words together “Angelos” = angel (messenger) and “logos” = word, meaning the word of Angels. 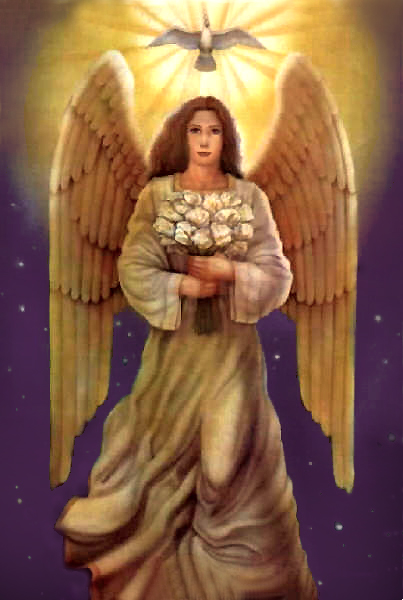 The angel is a spiritual supernatural being found in many religions. In Christianity, Judaism, and Islam, they act as messengers of God. In other religions they act as warriors and guards, the popular concept of “Guardian Angel” is in modern western culture.

Angels are usually viewed as emanations of a supreme divine being, sent to do the tasks of that being. Traditions vary as to whether angels have free will or are merely extensions of the supreme being's will. While the appearance of angels also varies, many views of angels give them a human shape.

Angels are usually viewed as emanations of a supreme divine being, sent to do the tasks of that being. Traditions vary as to whether angels have free will or are merely extensions of the supreme being's will. While the appearance of angels also varies, many views of angels give them a human shape.

The Bible, Oral Law, Midrash and various mystical texts present angels as heavenly beings created by God who are not endowed with free will. They occasionally appear on earth in furtherance of God's will, often as messengers. They are frequently encountered in mystical texts, particularly those of the Merkabah tradition. Jewish angelology is far from systematic, and the purpose, nature and personalities of individual angels and the heavenly host as a whole varies greatly across historical eras, texts, genres and traditions.

The Bible uses the terms מלאך אלהים (melakh Elohim; messenger of God), מלאך יהוה (melakh Adonai; messenger of the Lord), בני אלוהים (b'nai Elohim; sons of God) and הקודשים (ha-qodeshim; the holy ones) to refer to beings traditionally interpreted as angels. Other terms are used in later texts, such as העוליונים (the upper ones). Daniel is the first biblical figure to refer to individual angels by name.

In post-Biblical Judaism, certain angels came to take on a particular significance and developed unique personalities and roles. Though these archangels were believed to have rank amongst the heavenly host, no systematic hierarchy ever developed. Metatron is considered one of the highest of the angels in Merkabah and Kabbalist mysticism and often serves as a scribe. He is briefly mentioned in the Talmud,and figures prominently in Merkabah mystical texts. Michael, who serves as a warrior and advocate for Israel (Daniel 10:13)is looked upon particularly fondly. Gabriel is mentioned in the Book of Daniel (Daniel 8:15-17) and briefly in the Talmud, as well as many Merkabah mystical texts.

In the Middle Ages, some Jews presented a rationalist view of angels that is accepted by many Jews. The rationalist view of angels, as held by Maimonides, Gersonides, Samuel Ibn Tibbon, etc., states that God's actions are never mediated by a violation of the laws of nature. Rather, all such interactions are by way of angels. Even this can be highly misleading: Maimonides harshly states that the average person's understanding of the term "angel" is ignorant in the extreme.

Rather, according to Maimonides, the wise man understands that what the Bible and Talmud refer to as "angels" are actually metaphors for laws of nature, or the principles by which the universe operates. This is explained in his Guide of the Perplexed II:4 and II:6, and differs from the more widespread perception of angels in the Torah.

...This leads Aristotle in turn to the demonstrated fact that God, glory and majesty to Him, does not do things by direct contact. God burns things by means of fire; fire is moved by the motion of the sphere; the sphere is moved by means of a disembodied intellect, these intellects being the 'angels which are near to Him', through whose mediation the spheres [planets] move....thus totally disembodied minds exist which emanate from God and are the intermediaries between God and all the bodies [objects] here in this world.

Early Christians took over Jewish ideas of angels, which had passed from an early stage, where the idea of angels oscillated between that of a messenger of God and God himself to an identification with specific individual messengers (Raphael, Gabriel, Michael, and Uriel). Then, in the space of little more than two centuries (from the third to the fifth) the image of angels took on definite characteristics both in theology and in art.

By the late fourth century there is a consistent teaching among the Church Fathers on the existence of different categories of angels in line with the missions and activities assigned to them. Development of the doctrine of the angels was related to the settlement of the Trinitarian disputes in which some proposed that Jesus was not divine but on the level of immaterial beings subordinate to the Trinity.