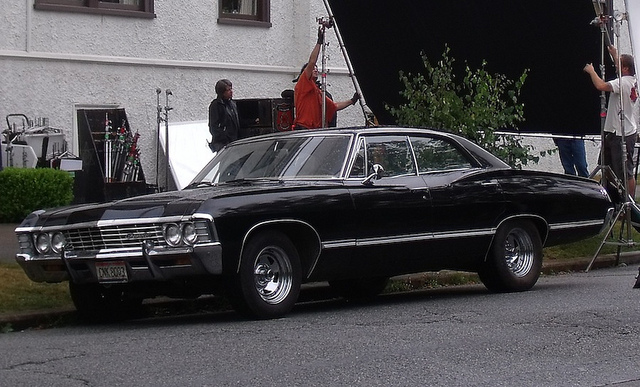 Dean's trademark black 1967 Chevrolet Impala was passed down to him by his father. It bears a Sedgwick County, Kansas license (though their hometown of Lawrence, Kansas is actually in Douglas County) plate KAZ 2Y5, a reference to Kansas, the Winchesters' home state, and 2005, the year the show premiered. Starting in the episode 2.20 "What Is and What Should Never Be", the car sports a new Ohio license plate (CNK 80Q3) to aid in the brothers' hiding from the FBI.

In an interview at a convention, Ackles said the main Impala they use has a 427 and skid plates.
The car has been prominently featured on the series, beginning with the teaser of the pilot which shows John Winchester holding his two sons as he sits on the car and watches his house burn. The car is Dean's most prized possession, and he protects it with nearly the same ferocity with which he protects his family.

In the pilot episode, the trunk is revealed to hold various weaponry to fight the supernatural. On a closer look, the trunk contains at least three machetes, what appear to be Marine Corps Ka-bar knives, an arrow, a spearhead, two silver spikes, several throwing stars with engravings on them, a revolver-type grenade launcher (loaded with police 37mm grenades), two flare guns, two tazers, two double-barrel sawed-off shotguns (another shotgun with long barrels was taken in Hook Man), a pistol grip pump-action shotgun (which is used to prop the trunk open), and a Heckler & Koch G3A3ZF sniper rifle. There are also several pistols including: a silver Desert Eagle, silver Colt 1911 with engravings, a silver Beretta 92FS (and the matte black Beretta 92FS as well), a matte black Colt M1911, and a Smith and Wesson M645.

The car is moderately damaged at the end of the pilot episode and nearly totaled in a crash at the end of the season one finale. Dean manages to rebuild the car; the newly restored vehicle is prominently featured in Bloodlust in an extended sequence to the soundtrack of AC/DC's "Back in Black." Dean's car continues to play an important role in the series throughout the second, third and fourth seasons.

At the end of season five, Chuck -- while recounting the escapades of the Winchester boys -- calls the Impala "the most important object in the universe." A montage shows how important the car has been to the family and the boys throughout everything that has happened to them. On the final battlefield in Swan Song, a light glinting off the window of the Impala revives Sam and makes him snap out of his possession by Lucifer long enough to stop beating up Dean and to throw Lucifer, along with Michael, into the pit.