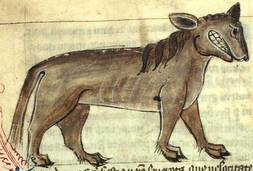 The crocotta (or corocotta, crocuta, or yena), is a mythical dog-wolf of India or Ethiopia, said to be a deadly enemy of men and dogs.
This beast was first written about by Pliny in his work Natural History (book VIII, chapter 30). He simply described the crocotta as a combination between dog and wolf with impossibly strong teeth and instant digestion. Other mythologies have described the crocotta as a gluttonous beast that digs up the buried dead and prowls around farms at night. It was said that the crocotta would lure dogs to their death by imitating the sound of a man in distress. When the dogs heard the cry they would follow the sound, only to be attacked and devoured. The beast was also said to occasionally hide in bushes at the edge of the forest listening to the farmers talking and calling each other by name. The crocotta would then repeat one of the names to lure the person into the woods. When the man approached, it would draw back into the brush and speak his name again. As the man followed, the creature would continue to draw deeper into the woods. When the victim was beyond help, the animal would leap upon him and devour him. Other legends ascribed the crocotta with the ability to change its color or gender at will. Some legends said that animals that attempted to stalk it would freeze in their own tracks. The eyes of a slain crocotta were said to be striped gems that would give the possessor oracular powers when placed under the tongue.