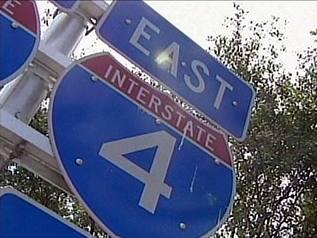 (setting of 216 Roadkill episode)
An overpass on I-4 just north of Orlando at the St John's River in Seminole County. It is known as the "Dead Zone" because of four graves beneath the highway.
The history of this area goes back to 1887 when a yellow fever epidemic hit a small Roman Catholic colony killing four members of one of its families. With their priest dead, there was no one to administer last rites and they were buried without ceremony in four graves. In 1905, Albert Hawkins bought the land and cleared it for farming. He found the four graves and in respect for the dead, Hawkins farmed around the little cemetery which sat in the middle of the field like an island. The area became known as the Field of the Dead and was for many years a well-kept secret by the local community. When Hakins died in 1939 his widow continued to own the land until 1960 when it was purchased by the state for the building of Interstate-4. The little cemetary was identified to the State surveyors, but the graves were not removed and were soon covered up with fill dirt to elevate the new highway. At the exact time that the fill dirt was dumped on the site, Hurricane Donna crossed the state, the eye of this strange storm passed right over the graves. The fury and flooding caused by Hurricane Donna disrupted highway construction for several months. Not only was Donna the worst storm to hit the interior of Central Florida in a century, it followed a very strange path. It had already crossed South Florida from the Atlantic and appeared to be heading westward into the Gulf of Mexico - then it took a strange and eerie turn, and basically followed the right-of-way Interstate-four through Central Florida with the eye passing over the graves about midnight. The storm exited into the Atlantic near Ormand Beach. Many people believe that the strange maneuver of Hurricane Donna was caused by the highway construction tampering with the dead.Witnesses have said that their cell phones will pick up strange voices at the south end of the Interstate-4 bridge in Seminole County. One woman reports that if she is talking with someone on the phone, the conversation is interrupted by what she believes to be "the voices of the dead". This section is also infamous for an extremely high number of accidents, reports of ghost hitch-hikers, static on car radios and cell phones. Also reported are sightings of white mist and balls of light as you pass through this section on the interstate.Since 1963, nearly 2,000 accidents have been reported on a stretch of Interstate 4 in Central Florida located between Daytona Beach and Orlando.