At a stone fountain in a park, a street preacher encourages his listeners to repent and beg for God’s divine mercy, because only the forgiven will ascend to holy grace. Amara walks forward and challenges the preacher, saying that God is not watching, is not interested, and is not around because she has not been able to find him. A brief debate ensues, during which Amara comes to believe that God can be provoked to wrath. When the preacher says that only God’s wrath can create plagues and destruction on Earth, Amara turns the water in the fountain into blood. She then tells the preacher that God is not the only game in town. Raising her arms toward the sky, she causes lightening to strike the preacher and his followers, killing them all. 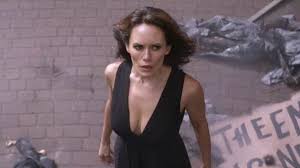 As she looks around at the charred bodies, the fountain’s water turns back to normal. Amara looks up to the sky and asks “Well?” as a direct challenge to God.

As the episode opens, Sam is dreaming about being inside the cage with Lucifer. Lucifer touches Sam’s face, and the scene switches to Sam standing in a forest. He asks God “Is this what you want?” and a bush behind Sam bursts into flames. The scene then switches to Sam sitting in the Men of Letters’ library telling Dean about this latest vision. Sam is convinced that the visions are coming from God, and that God wants him to return to the cage. He also says that when Lucifer touched him, he felt calm. Dean is skeptical, tries to convince Sam that even a burning bush isn’t enough proof that the visions are coming from God, and tells Sam that returning to the cage is a horrible idea. Sam maintains that Lucifer was there when the Darkness was battled the first time, and may know what to do to defeat it this time.

The Boys talk to Crowley, who tries to talk them out of opening the cage. When Dean reminds Crowley that the Darkness is a threat to him, too, Crowley asks Dean what his connection is with the Darkness, and why she spared him. Dean tells Crowley that Amara is God’s sister. After a brief discussion, Crowley says there may be a way to speak to Lucifer without Sam entering the cage (which we see, made of stone and hanging suspended in mid air by chains in the middle of hell). Crowley suggests there’s a way to create a “secure site” in hell, where Lucifer’s powers will be neutralized, but Sam will still be able to talk to him. He tells the Winchesters that the information they need is in the Book of the Damned.

Still looking for God, Amara goes into a church where a handful of people are praying. She tells the priest that she is looking for God and needs to meet with him. When he says the church is God’s house and the way to reach him is through prayer, Amara takes that literally, but becomes quickly frustrated when her prayer doesn’t cause God to appear within a few seconds. The priest tries to tell Amara about God and his message, but she says that humanity is being manipulated. Later, we see that Amara has broken several statues in the church, killed all the worshipers and is currently eating the priest’s soul. As she casts the priest's lifeless body aside, she shouts to God that all his chosen ones are suffering and challenges God to show himself.

At Crowley’s lair, we see that Crowley’s goons have captured Rowena and brought her to Crowley. The Winchesters appear, and explain the situation to Rowena. The four uneasy “allies” agree that they can’t trust one another, but Crowley says that a “devil’s bargain” is their only choice. In exchange for Crowley’s agreeing to stop his assassins from trying to kill Rowena, she agrees to tell the Winchesters how to open the cage and protect Sam.

Meanwhile, several angels are secretly meeting at an auto body shop. Their leader says that God is still absent, so the Darkness will take over heaven and the angels will suffer if the Darkness is not dealt with. He says they should put their differences aside and work together to defeat Amara.

Later, we see that Sam is at the bunker with Rowena. She is in shackles and is looking through the Book of the Damned and the codex. Sam is talking on his phone to Dean, who is dressed as an FBI agent and investigating the murders at the church. Sam tells Dean that the information they need is in the Book, while Dean tells Sam about Amara’s massacre at the church. Dean asks Sam if he’s sure he’s okay with their deal. Sam says he’s not “okay” with it, but doesn’t have a choice. Sam agrees wait for Dean to get back to the bunker before he does anything, and hangs up. Suddenly, Rowena says she has found the spell they need and will need some ingredients.

As Dean exits the church, he appears to hear a strange sound (and to be experiencing a strange feeling). He follows the sound to a nearby park, and looks around strangely, as if trying to identify where the sound is coming from and figure out what brought him to the place. Dean’s cell phone rings, and he sees that Sam is calling. He prepares to answer, but simultaneously, he turns slowly around and sees that Amara has appeared behind him. He does not take Sam’s call and begins talking to Amara. Amara tells Dean that he felt her presence, which drew him to the park. She touches his arm, and suddenly they are transported to a field in a remote area. Meanwhile, at the bunker, Sam hangs up. He wants to wait for Dean as they'd agreed, but Rowena tells him that they don’t have time to wait.

As Dean and Amara talk, Amara tries to convince Dean that she means no harm to creation, but she only killed the people at the park and in the church to get God’s attention. Dean says that Amara’s fight is with God and not with humans, so taking people’s souls and killing them is wrong. Amara says that when she consumes souls, they become a part of her and will live forever in that way. Amara says she understands why Dean doesn’t trust her, because humanity has been misled by God. 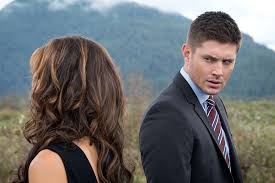 Amara is vague, but tries to convince Dean that the universe would be in a permanent state of bliss if she was in charge. When Dean asks what she wants, she says she deserves “everything”. Dean suddenly tries to stab Amara with a knife, but it shatters. As Dean stands, looking confused, Amara says she understands that Dean is a warrior and his instinct is to resist, but she can’t be resisted. She positions herself as if she is going to eat Dean’s soul, but hesitates briefly and kisses him instead. Dean seems to be under her spell and kisses her back. Afterward, Dean steps back, confused. Amara tells Dean that they are bound by the Mark, that it was destiny that he set her free, and that they will become one. Dean denies this. As they’re talking, 3 angels appear and tell Amara to submit to the judgment of heaven. 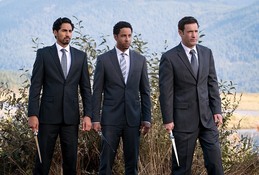 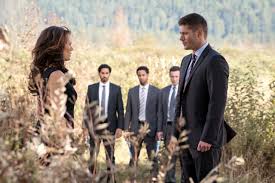 If she refuses, she will be smote by one unified strike from all the angels in heaven. Dean tells the angels that if they kill Amara, many people will die. The first angel says sacrifice is inevitable, and approaches Amara with an angel blade. She kills him and proceeds to kill the other two angels. As the clouds overhead become tumultuous, indicating that the smite from heaven is imminent, Amara says “maybe now, he’ll hear me” and zaps Dean back to the park. After Dean is gone, a concentrated beam of energy descends from the clouds and strikes Amara. 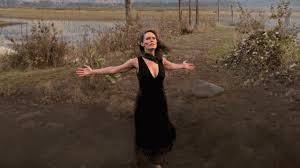 Meanwhile, in hell, Sam, Crowley and Rowena approach an empty, metal cage in a remote area in hell. Rowena paints warding sigils on the cage, and begins an incantation. As she chants, a square of fire appears around the cage and Lucifer materializes inside it. 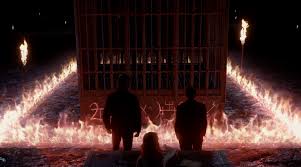 Rowena seems to admire Lucifer. As Crowley and Rowena look on, Sam and Lucifer talk out of earshot. 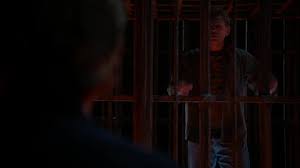 Crowley says he hopes Sam knows better than to strike a deal, but Rowena says that sometimes even a painful deal is still the only option. Sam tells Lucifer about the release of the Darkness, and explains that God appears to be absent, but has reached out to him and told him to seek out Lucifer’s help. Lucifer says Amara is equal to God in raw power, but lacks his experience and ability to strategize. Lucifer says that he’ll help with the Darkness if Sam will agree to be his vessel. Sam refuses. Lucifer tells Sam that his visions were God’s word, so he can’t say ‘no’. Sam still refuses. As Lucifer looks on, the sigils on the cage and the fire surrounding it disappear. Crowley rushes forward, asking Rowena what is going on; but Rowena leads a confused Crowley away from the area to safety. As the warding sigils and fire dissipate, Sam looks around and is horrified to learn that he is suddenly inside the cage. Lucifer tells Sam that when the Darkness was released, the impact damaged the cage and allowed Lucifer to reach out in between the cracks. He tells Sam that the visions we coming from him, not from God, and that God has never been with him. As Sam realizes what has happened and how horribly he has been tricked, a single tear streams down his face. 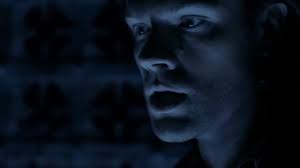 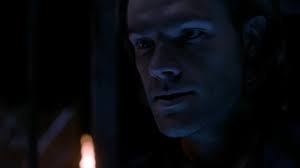