Back to Supernatural Equipment 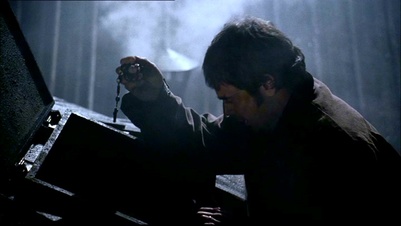 The Winchesters on Supernatural have occasionally been seen with a Rosary, which is used to ward off demons. Most notable uses include John in the episode Salvation in season 1. John Winchester blesses the water in a tank by dropping a Rosary into it, thus creating holy water to ward off demons. In season three, the episode Jus In Bello, the Winchester brothers use a Rosary dropped in a toilet to create holy water and de-possess Hendricksen. The third most notable use of a Rosary in the show is also in season three, by Bobby, in No Rest for the Wicked, in which he drops a Rosary into a well to bless the water. This once again repels demons when the sprinkler system is turned on.

What makes the Rosary very special is that they have the blessing of a priest to make them sacramentals. In Supernatural this would indicate some type of holy power that would make the object and what the object touches holy.

Sacramentals are those rites, actions and things which the Church uses in imitation of the Sacraments in order to obtain through the intercession of the Saints certain effects, particularly of spiritual nature. If used in accordance with the mind of the Church, sacramentals are the means of receiving actual grace to do good and avoid evil, of protection of soul and body, and the remission of venial sin.

Among the sacramentals are prayers, holy water, blessings, the sign of the cross, salt, ashes, medals, the Rosary, candles, vestments, etc.

The Rosary itself is a popular Catholic/Christian devotion and consists of prayer beads that are associated with various prayers. The prayers consist of repeated sequences of the Lord's Prayer followed by ten recitations of the Hail Mary and a single recitation of Glory Be to the Father. Each of these sequences is known as a decade. The recitation of each decade is accompanied by meditation on one of the Mysteries of the Rosary which are events in the lives of Jesus Christ and his mother, the Blessed Virgin Mary. It is said that: "Satan recoils from them (the prayers and beads of the Rosary). He cannot bear their overwhelming strength".

A rosary provides a physical method of keeping track of the number of Hail Mary's said. The fingers are moved along the beads as the prayers are recited. By not having to keep track of the count mentally, the mind is more able to meditate on the mysteries. A five decade rosary contains five groups of ten beads (a decade), with additional large beads before each decade. The Hail Mary is said on the ten beads within a decade, while the Our Father is said on the large bead before each decade. A new mystery is meditated upon at each of the large beads. Some rosaries, particularly those used by religious orders, contain fifteen decades, corresponding to the traditional fifteen mysteries of the rosary. Both five and fifteen decade rosaries are attached to a shorter strand, which starts with a crucifix followed by one large, three small, and one large beads before connecting to the rest of the rosary. The recitation of the rosary is started on the short strand, reciting the Apostle's Creed at the crucifix, an Our Father at the first large bead, three Hail Marys on the next three beads, then a Glory be to the Father on the next large bead. The recitation of the decades then follows. Although counting the prayers on a string of beads is customary, the prayers of the rosary do not actually require a set of beads, but can be said using any type of counting device, by counting on one's fingers, or by counting by oneself without any device at all.
The beads can be made from a wide variety of materials including wood, bone, glass, crushed flowers, semi-precious stones such as agate, jet, amber, or jasper, or precious materials including coral, crystal, silver, and gold. Rosaries are sometimes made from the seeds of the "rosary pea" or "bead tree". Today, the vast majority of rosary beads are made of glass, plastic, or wood. Early rosaries were strung on strong thread, often silk, but modern ones are more often made as a series of chain-linked beads. Our Lady's Rosary Makers produce some 7 million rosaries annually that are distributed to those in economic and spiritual need.
It is especially common for beads to be made of material with some special significance, such as jet from the shrine of St. James at Santiago de Compostela, or olive seeds from the Garden of Gethsemane. Beads are sometimes made to enclose sacred relics, or drops of holy water. A set of blessed Rosary Beads is a sacramental.

A good, simple, secular man had the custom of making every day a chaplet of roses, or flowers, or rue, or of whatever he could, according to the season, and placing it on the head of an image of Our Lady. This he did with great enjoyment and pious devotion. The Virgin saw the good intention of his heart and, wanting to help him further it, gave him the desire to take up the religious life. And so he became a lay brother in a cloister. But in the cloister he was given so many tasks to perform that he no longer had time to make Mary her chaplet as he was accustomed to doing. Because of that, he became dissatisfied and was about to leave the order and go back into the world, when an older priest became aware of his distress. The priest wisely advised him that he should recite each day fifty Ave Marias (Hail Marys) in place of the chaplet and convinced him that Mary would prefer that to all the rose chaplets that he had ever made. The lay brother followed the advice and continued in it for some time.
The one day, he was sent on an errand that required him to ride through a forest which harbored thieves. In the forest he tied his horse to a tree, knelt and down, and was reciting his fifty Ave Marias (Hail Marys) when thieves saw him and decided to rob him and steal his horse. But as they approached him, they saw from a distance a wonderfully beautiful maiden standing by him, who, every little while, took from his mouth a beautiful rose and added it to a chaplet she was making. When the rose chaplet was complete, she placed it on her head and flew off to heaven. The robbers were thoroughly amazed and ran to the brother asking him who the beautiful maiden was that they had seen beside him. The lay brother replied: "I did not have any maiden with me. I have only been reciting fifty Ave Marias (Hail Marys) as a chaplet for Queen Mary, as I was instructed. And that is all I know."

When the robbers told him what they had seen, the lay brother, and the robbers, too, realized that it was the most revered Mother of God who, in person, had accepted the rose chaplet that we are accustomed to send to her daily through our angel. 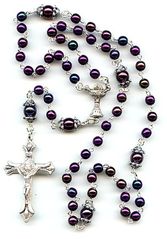