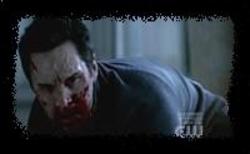 The Rougarou (alternately spelled as Roux-Ga-Roux, Rugaroo, or Rugaru), is a legendary creature in Laurentian French communities linked to European notions of the werewolf.

The stories of the creature known as a rougarou are as diverse as the spelling of its name, though they are all connected to francophone cultures through a common derived belief in the Loup-garou (pronounced [lu ga'?u] in French and [lu g?'?u] in English). Loup is French for wolf, and garou (from Frankish garulf, cognate with English werewolf) is a man who transforms into an animal.

Rougarou represents a variant pronunciation and spelling of the original French loup-garou. According to Barry Jean Ancelet, an academic expert on Cajun folklore and professor at the University of Louisiana at Lafayette, the tale of the rougarou is a common legend across French Louisiana. Both words are used interchangeably in southern Louisiana. Some people call the monster rougarou; others refer to it as the loup garou.
The rougarou legend has been spread for many generations, either directly from French settlers to Louisiana (New France) or via the French Canadian immigrants centuries ago.

In the Cajun legends, the creature is said to prowl the swamps around Acadiana and Greater New Orleans, and possibly the fields or forests of the regions. The rougarou most often is described as a creature with a human body and the head of a wolf or dog, similar to the werewolf legend.A common blood sucking legend says that the rougarou is under the spell for 101 days. After that time, the curse is transferred from person to person when the rougarou draws another human’s blood. During the day the creature returns to human form. Although acting sickly, the human refrains from telling others of the situation for fear of being killed.

Other stories range from the rougarou as a headless horseman to the rougarou being derived from witchcraft. In the latter claim, only a witch can make a rougarou—either by turning into a wolf herself, or by cursing others with lycanthropy.

The creature, spelled Rugaru, has been associated with Native American legends, though there is some dispute. Such folklore versions of the rugaru vary from being mild bigfoot (sasquatch) creatures to cannibal-like Native American wendigos. Some dispute the connection between Native American folktales and the francophone rugaru.
As is the norm with legends transmitted by oral tradition, stories often contradict one another. The stories of the wendigo vary by tribe and region, but the most common cause of the change is typically related to cannibalism.

A modified example, not in the original wendigo legends, is that of a motif of harmful sensation story—if a person sees a rugaru, that person will be transformed into one. Thereafter, the unfortunate victim will be doomed to wander in the form of this monster. That rugaru story bears some resemblance to a Native American version of the wendigo legend related in a short story by Algernon Blackwood. In Blackwood's fictional adaptation of the legend, seeing a wendigo causes one to turn into a wendigo.