Salt ( NaCl ) is a dietary mineral essential for animal life, composed primarily of sodium chloride. Salt for Other than in rock form, salt is als human consumption is produced in different forms: unrefined salt (such as sea salt), refined salt (table salt), and iodised salt. It is a crystalline solid, white, pale pink or light grey in color, normally obtained from sea water or rock deposits. Edible rock salts may be slightly greyish in color due to this mineral content. Chloride and sodium ions, the two major components of salt, are necessary for the survival of all living creatures including humans. Some isolated cultures, such as the Yanomami in South America, have been found to consume little salt, possibly an adaptation originated in the predominantly vegetarian diet of human primate ancestors. Salt is involved in regulating the water content (fluid balance) of the body. Salt flavor is one of the basic tastes. Salt cravings may be caused by trace mineral deficiencies as well as by a deficiency of sodium chloride itself. It is believed that over consumption of salt may increase the risk of health problems, including high blood pressure. In food preparation, salt is used as a preservative and as a seasoning. 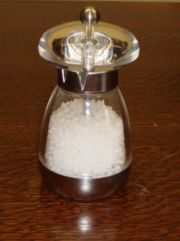 Common salt (NaCl) has been used for dietary purposes as well as a preservative, a medium of exchange and a source of tax revenue since the ancient times. During the times of the historian Herodotus, salt was known along the Libyan desert. Pliny the elder remarked "Heaven known, a civilised life is impossible without salt." Pliny lists India, Arabia and Africa as sources for extraction of salt. Salt was one of the main marine resources of the Harappans, who may have used a site near the Gulf of Khambat for salt extraction. Methods of both the salt mining and the procurement by sea were known in ancient India. Salt mines from ancient India were the center of widespread trade.Roman soldiers received some of their salaries in form of salt, with the arrangement then known as salarium. The ancient Mayan civilization also produced salt. The method of boiling of brine to recover salt was known in Iron Age Europe. Japan developed a two step process for concentration and evaporation which has existed since at least 600 CE. The middle ages saw East Africa develop methods to extract salt from the brine deposits originating in the rift systems. Elaborate arrangements were made to ensure salt productions, including ditches, storage tanks and the use of various heating techniques.

There are thirty-five verses which reference salt in the English translation of the Bible (King James Version), the earliest being the story of Lot's wife, who was turned into a pillar of salt when she disobediently looked back at the wicked cities of Sodom (Genesis 19:26). When King Abimelech destroyed the city of Shechem he is said to have "sowed salt on it;" a phrase expressing the completeness of its ruin. (Judges 9:45.) In the Sermon on the Mount, Jesus referred to his followers as the "salt of the earth". The apostle Paul also encouraged Christians to "let your conversation be always full of grace, seasoned with salt" (Colossians 4:6) so that when others enquire about their beliefs, the Christian's answer generates a 'thirst' to know more about Christ. Salt is mandatory in the rite of the Tridentine Mass. Salt is used in the third item (which includes an Exorcism) of the Celtic Consecration (refer Gallican rite) that is employed in the consecration of a church. Salt may be added to the water "where it is customary" in the Roman Catholic rite of Holy water. In the native Japanese religion Shinto, salt is used for ritual purification of locations and people, such as in Sumo Wrestling. In Aztec mythology, Huixtocihuatl was a fertility goddess who presided over salt and salt water.

Pagans and Wiccans use blessed salt in consecrated water for rituals intended to banish negative forms/energy. The salt water is sprinkled across all windows, thresholds and in every corner of the space to be protected, forming a barrier to all negative forms.

Salt has also been used in other theologies to bless bread or for purification in ritual sacrifice.