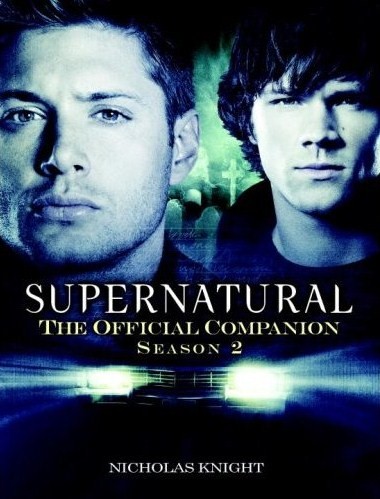 From the producers of The O.C. and The X-FiIes, and starring Jared Padalecki (Gilmore Girls, House of Wax) and Jensen Ackles (Smallville, Dark Angel), Supernatural is the hit series that takes viewers on a spooky road trip through the dark heart of America. Now Titan is giving fans the chance to get up close and personal with the good, the ghastly and the gorgeous of the programme's second season, in Supernatural The Official Companion Season 2 [Titan Books, $14.95/CAN $16.95, April 2008].

Brothers Sam and Dean Winchester cruise America's back roads in their 1967 Chevy Impala, on a mission to hunt down the demon that killed their mother and reveal the secret behind Sam's mysterious powers. Along the way they confront creatures most people believe exist only in folklore and nightmares, including vampires, werewolves, ghosts, djinn, hellhounds and even murderous clowns!

This second official companion features a foreword from executive producer/director Robert Singer, plus an abundance of exclusive comments and content from series creator and executive producer Eric Kripke. Also included is a complete season two episode guide, and pages packed with exclusive interviews, dozens of photos - including a 16-page color gallery - and behind-the-scenes secrets, including a Meet the Crew section on the writers, editors and make-up designers.