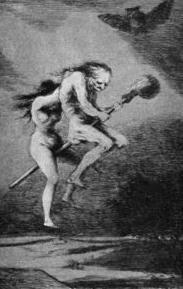 A witch (from Old English masculine wicca, feminine wicce, see Witch (etymology) is a practitioner of witchcraft. The Online Etymology Dictionary states a "possible connection to Gothic weihs "holy" and Ger. weihan "consecrate," and writes, "the priests of a suppressed religion naturally become magicians to its successors or opponents." While mythological witches are often supernatural creatures, historically many people have been accused of witchcraft, or have claimed to be witches. In "Some Reflections on the Relationship Magic-Religion", author H. S. Versnel writes: "Anthropologists in particular have argued that no meaningful contrast between religion and magic can be gained from this approach and that our notion 'magic' is a modern-western biased construct which does not fit representations of othercultures." Witchcraft still exists in a number of belief systems, and indeed there are many today who self-identify with the term "witch" (see below, under Neopaganism).

While the term "witchcraft" can have positive or negative connotations depending on cultural context (for instance, in post-Christian European cultures it has historically been associated with evil and the Devil), most contemporary people who self-identify as witches see it as beneficent and morally positive.

The majority of Europeans historically accused of witchcraft were women and in legends and popular culture the stereotype is female; however males were also often referred to as witches.

Practices and beliefs that have been termed "witchcraft" do not constitute a single identifiable religion, since they are found in a wide variety of cultures, both present and historical; however these beliefs do generally involve religious elements dealing with spirits or deities, the afterlife, magic and ritual. Witchcraft is generally characterised by its use of magic.

Sometimes witchcraft is used to refer, broadly, to the practice of indigenous magic, and has a connotation similar to shamanism. Depending on the values of the community, witchcraft in this sense may be regarded with varying degrees of respect or suspicion, or with ambivalence, being neither intrinsically good nor evil. Members of some religions have applied the term witchcraft in a pejorative sense to refer to all magical or ritual practices other than those sanctioned by their own doctrines - although this has become less common, at least in the Western world. According to some religious doctrines, all forms of magic are labelled witchcraft, and are either proscribed or treated as superstitious. Such religions consider their own ritual practices to be not at all magical, but rather simply variations of prayer.

"Witchcraft" is also used to refer, narrowly, to the practice of magic in an exclusively inimical sense. If the community accepts magical practice in general, then there is typically a clear separation between witches (in this sense) and the terms used to describe legitimate practitioners. This use of the term is most often found in accusations against individuals who are suspected of causing harm in the community by way of supernatural means. Belief in witches of this sort has been common among most of the indigenous populations of the world, including Europe, Africa, Asia and the Americas. On occasion such accusations have led to witch hunts.

Under the monotheistic religions of the Levant (primarily Christianity, and Islam), witchcraft came to be associated with heresy, rising to a fever pitch among the Catholics, Protestants, and secular leadership of the European Late Medieval/Early Modern period and sometimes leading to witch hunts. Throughout this time, the concept of witchcraft came increasingly to be interpreted as a form of Devil worship. Accusations of witchcraft were frequently combined with other charges of heresy against such groups as the Cathars and Waldensians.

The Malleus Maleficarum, a witch-hunting manual used by both Roman Catholics and Protestants, outlines how to identify a witch, what makes a woman more likely to be a witch, how to put a witch to trial and how to punish a witch. The book defines a witch as evil and typically female.

In the modern Western world, witchcraft accusations have often accompanied the Satanic Ritual Abuse hysteria. Such accusations are a counterpart to blood libel of various kinds, which may be found throughout history across the globe.