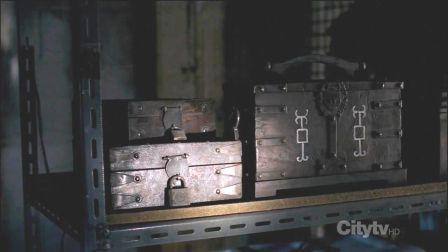 Curse boxes are typically wooden and are always locked to insure that the contents remain safely in the box. Curse boxes will have sigils on the exterior of the box and are designed keep magically cursed object from causing destruction or from harming anyone.

Cursed objects are made by using dark magic and are designed to cause physical harm, death and destruction. It is because of this that causes me to think of pandora's box, its possible that this is where they got the idea for the curse boxes from.

After Sam and Dean get a call on johns old phone they boys find out that someone broke intp a secret storage place john had in New York. Besides have memorabilia from sam and deans child hood john also kept curse boxes made for him by bobby singer. Turns out the rabbits foot was made in Baton Rouge by a conjure woman over a 100 years ago, and this object is much more than a lucky charm. Once someone touches the rabbits foot they will have extraordinary luck as long as it is still in your possession. But if you ever lose it or it is no longer in your possession your luck will turn so bad that you will mostly likely die with in several days.