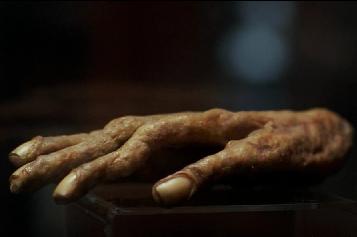 The Hand of Glory is the dried and pickled hand of a man who has been hanged often specified as being the left (Latin: sinister) hand, or else, if the man were hanged for murder, the hand that "did the deed."
According to old European beliefs, a candle made of the fat from a malefactor who died on the gallows virgin wax, and Lapland sesame oil (the candle could only be put out with milk), and the hand having come from the said hanged criminal, lighted and placed in the Hand of Glory (as in a candlestick) would have rendered motionless all persons to whom it was presented. (In another version the hair of the dead man is used as a wick, also the candle is said to give light only to the holder.) The Hand of Glory also purportedly had the power to unlock any door it came across.
The legend is traceable to about 1440, but the name only dates from 1707. It was originally a name for the mandrake root (via French "mandragore" and thus, "maindegloire" - "hand of glory") that became conflated with the earlier legend. The confusion may have occurred because mandrakes are said to grow beneath the bodies of hanged criminals.
In Supernatural
In 3.06 Red Sky At Morning Bela steals the Hand of Glory from the Sea Pines Maritime Museum. The hand is haunted by a Vengeful Spirit whose hand it was in life. The spirit was hanged for treason on a ship captained by his brother; thus he takes vengeance on people responsible for the death of family members.