TEASER:
As the scene opens, we see a gathering of hunters and AU hunters at the bunker. There are pictures of Mary on the map table in the war room, and Dean gives a eulogy of sorts, followed by a toast to Mary. 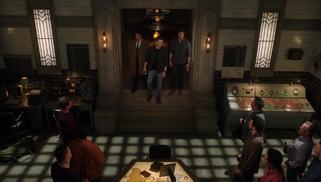 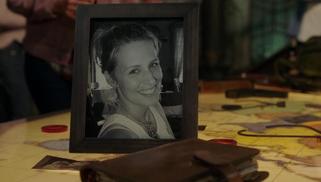 Shortly afterward, Bobby enters – killing a wraith who was posing as one of the mourners.

Later, most of the guests have departed. Castiel, Bobby, and Sam are talking while Dean clears the photographs and other items and gathers them into a box. When Sam suggests that they have a drink and talk about Mary, Dean dismisses the idea and leaves with the box.

Later, Sam, Castiel, and AU Bobby are having beers in the kitchen. They talk briefly about Mary, and Bobby asks exactly what happened to her, because he’d heard rumors that Jack killed her. As Sam is replying, Dean enters the room and announces that he’s going out for a drink. 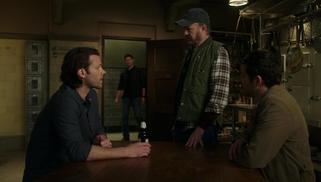 After Dean leaves, Bobby pursues his line of questioning. They all agree that Jack must be found, but Castiel wants to help Jack somehow, and Bobby wants to figure a way to kill him. After a brief but heated discussion, Bobby says he’s going to take some other hunters, find Jack, and kill him if they can. Then he leaves.

JACK
Jack is sitting alone in what looks like an abandoned warehouse, thinking about what he did to Mary, and wishing aloud that his mother was there to tell him what to do. Suddenly, his Lucifer hallucination appears and begins talking to him. Lucifer berates Jack, telling him that the Winchesters don’t care about him and they see him as a monster. Jack insists that he will explain that he made a mistake and the Winchesters will understand, because they’ve made mistakes, too. But Lucifer insists that Jack is all alone except for him. 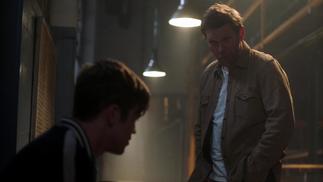 DEAN
In an undetermined, wooded area, we see Dean sitting alone and crying about Mary. 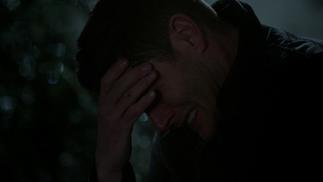 CASTIEL and DUMAH
Castiel arrives in heaven and confronts Dumah. He demands to speak with Naomi, but Dumah tells him that Naomi is in heaven’s prison because the Empty to stormed into heaven on her watch. It seems that Dumah is currently in charge of heaven. 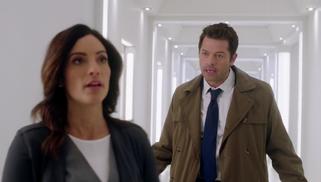 Castiel insists that he needs help finding Jack. He says that Jack has grown dangerously powerful, and now that he’s burned through his soul, the situation has worsened. Cas says that Jack is on the run because he fears the Winchesters, but Cas believes that Jack can be rehabilitated if he can find him. Dumah says she’ll see what she can do, but isn't specific about what she has planned. 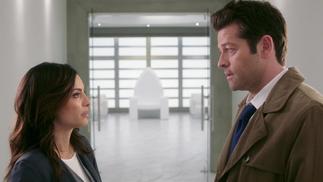 Back at the bunker, Dean arrives to find Sam searching his computer for signs that might lead him to Jack. Sam admits that he can’t stop thinking about Mary. He also mentions the fact that they know exactly where Mary is -- in heaven and at peace (to the viewer, it's difficult to tell from his demeanor whether that knowledge gives him any comfort). Dean mentions darkly that there wasn’t enough of her body left to even try to resurrect (to the viewer, it seems that Dean is angrier and more fixated on Mary’s death than Sam is).

JACK
Back at the warehouse, Dumah appears to Jack and convinces him that he’s special, that he has a glorious destiny, and that he can help make the world (and heaven) better, which would make Dean and Sam happy. She also tells him that what happened to Mary wasn’t his fault, and that he deserves redemption. 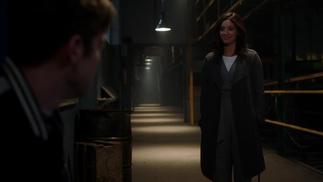 Next, we see Dumah and Jack teleport to the office of a university professor who is an atheist, lectures on atheism, and has written books about the subject. After a brief, hostile discussion during which Dumah berates the man for not believing in god and heaven, Jack turns him into a pillar of salt. 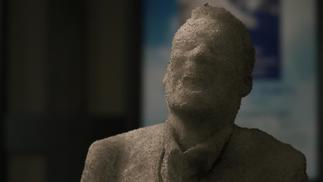 Later, Jack and Dumah return to heaven. Dumah tells Jack that, although he can’t make angels from scratch, he does have the power to convert humans into angels. She tells him that if a human is already predisposed to it, he can use the person's soul to create new angels. She encourages Jack to listen to humanity’s prayers, so she takes him to heaven’s throne room and he sits on the throne and begins hearing prayers. 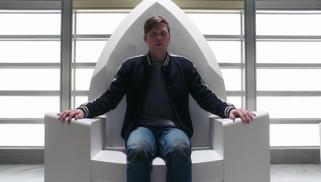 At first, he is bombarded by hundreds of voices at once, but soon he zeroes in on a group of church congregants praying for deliverance to heaven.

Suddenly, Jack appears in the midst of the bible study group. After a brief discussion, the congregants say they want to go to heaven and become angels. They don’t understand what they’re agreeing to until Jack shows them his wings. Suddenly, they all seem to be in a trance. 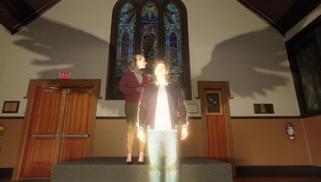 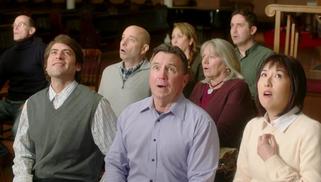 When the pastor arrives, he tries to put an end to the session. As a punishment, Jack tells him that he’ll be eaten from the inside by worms until he dies. The pastor falls to the floor and begins screaming as worms crawl out of his skin. Before the pastor dies, Jack and the congregants all disappear. 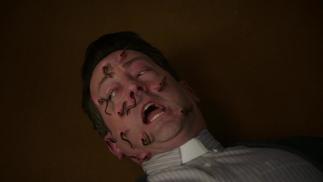 DEAN and SAM
Back at the bunker, Castiel updates the Winchesters, telling them that heaven has agreed to help them locate Jack, and that Jack’s power may represent a threat to the angels as well, so they have an interest in finding him. 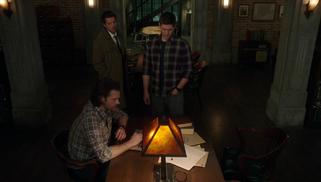 As they’re talking, Sam reveals that he found some disturbing news stories about a man who was turned into salt, and a woman (a crooked evangelist) who was swallowed up by the ground when a crevasse suddenly opened up underneath her feet. Cas quotes a bible verse that describes the murders and surmises that Jack is using biblical punishments to kill people.

Later, Dean, Sam, and Castiel arrive at the hospital (dressed as feds) to speak with the pastor, who is still alive, but still has worms under his skin. 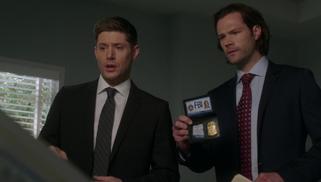 The pastor tells them what happened, and that the young man told him he was taking everyone to heaven to become angels. When the Winchesters show the pastor a photo of Jack, he identifies him as the man who disappeared with his congregants. He also says that Jack said he was carrying out heaven’s orders and punishing the pastor for not being a believer.

Outside the pastor’s hospital room, Cas tells the brothers that the punishment Jack used against the pastor is biblical, like the other murders.

Back at the bunker, Dean and Sam are talking. Dean laments that Jack’s head is not in the right place, and now that heaven has him, he can hurt a lot more people. He takes Sam into the room where he has stored the Malak box and tells Sam that since they can’t kill Jack, they have to trick him into getting into the box to contain him. 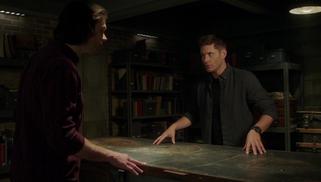 At first, Sam doesn’t agree. But Dean says that they should tell Jack that he’ll only have to stay in the box temporarily, because they’re working on a spell to restore his soul and as soon as the spell is ready, they’ll let him out. Dean also says that they both have to be on board with the idea, and that because Sam is closer to Jack and Jack trusts him more, he has to be the one to sell Jack on the idea. He also tells Sam that if he has to do it, he’ll lose it because he’s still angry about what Jack did to Mary. Sam reluctantly agrees to the plan.

JACK
Next, we see Castiel trying to get into heaven through the playground portal. The angel guarding the portal refuses to let him in due to new orders, but Castiel forces his way in.

In heaven's throne room, we see Jack using his powers to turn the congregants into angels one by one. 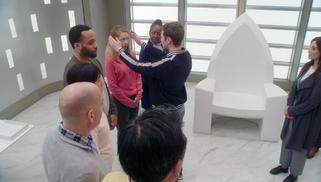 Before he can finish with the entire group, Castiel arrives and tries to stop him. Jack seems very proud of himself because he’s making angels. Castiel and Dumah step away to talk/fight. Cas accuses Dumah of using Jack to solidify her control over heaven. He also accuses her of using terror tactics against humanity. Dumah insists that she’s saving heaven and saving the world, and that she can give Jack the guidance he needs. Cas threatens to take Jack away, but Dumah says that if he does, she’ll remove John and Mary Winchester from heaven and send them someplace terrible. Castiel kills Dumah with an angel blade. 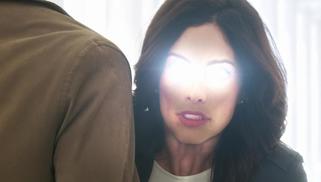 DEAN and SAM
Meanwhile, back at the bunker, Sam has agreed to Dean’s plan. Sam prays to Jack, telling him that they want to talk. When Jack hears Sam’s prayer in heaven, he teleports back to the bunker. During the conversation that follows, Jack proudly reveals that he’s been working with the angels to purify the world, and he’s been making new angels. Sam and Dean tell Jack that they missed him and want to clear things up between them. Jack says that he regrets the “accident” that happened with Mary, but he casually goes on to say that she kept talking about his soul and she wouldn’t leave him alone, so he snapped. Dean and Sam say they forgive Jack for what happened to Mary, and tell him that they’re close to being able to fix his soul. Dean adds that they just need to keep him safe in the meantime. Jack agrees that he doesn’t want to have any more accidents, so he agrees to do what they ask. 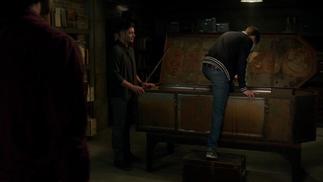 Dean and Sam take Jack to the Malak box and convince him to get inside. When jack asks how long he’ll have to stay inside, they reply that it won’t be very long. Once he’s inside, Dean closes and locks the box, and he and Sam leave the room and lock the door.

Later, an unknown amount of time has passed, and Jack starts to panic about being in the box. He calls for Dean and Sam, but they leave him alone. Suddenly, hallucination-Lucifer appears and berates Jack for trusting the Winchesters. He tells Jack that the Winchesters lied to him and will never forgive him for killing their mother. Suddenly, Jack becomes angry and starts trying to break out of the box. The box shakes and begins to glow white hot. 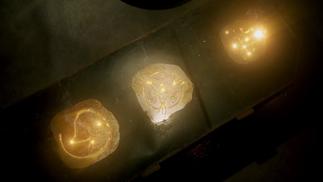 In the kitchen, Dean and Sam drink whiskey and discuss how difficult it will be to keep Jack locked up. Suddenly, Castiel arrives and tells the brothers that Dumah was manipulating Jack into doing the things he did, and convinced Jack that the Winchesters would be happy about his actions. When Castiel says that they must find Jack immediately, the brothers tell Cas what they have done.

Castiel is furious, and he and the brothers argue about keeping Jack in the Malak Box. Suddenly, the group hears a loud crash. They rush to the room where they left Jack to find the door blown off and the room full of smoke. Jack emerges from the smoke, with his eyes glowing yellow with rage. 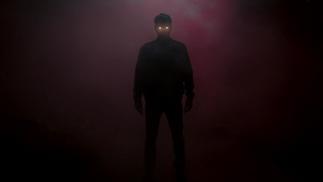