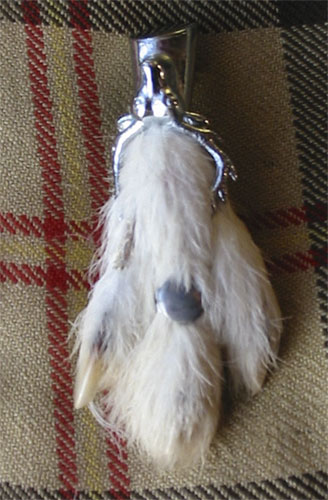 The left hind foot of a rabbit

The belief originates in the system of African-American folk magic known as hoodoo. A number of strictures attached to the charm that are now observed mostly in the breach:

A substitute for bones from a human corpse?

The various rituals suggested by the sources, though they widely differ one from another, share a common element of the uncanny, and the reverse of what is considered good-omened and auspicious. A rabbit is an animal that shapeshifting witches such as Isobel Gowdie claimed to be able to transmogrify themselves into. Witches were said to be active at the times of the full and new moon. Silver bullets, of course, are reputed to be sovereign against uncanny creatures such as werewolves. These widely varying circumstances may share a common thread of suggestion that the true lucky rabbit's foot is actually cut from a shapeshifted witch. The suggestion that the rabbit's foot is a substitute for a body part from a witch's body is corroborated by other folklore from hoodoo. Willie Dixon's song Hoochie Coochie Man mentions a "black cat bone" along with his mojo and his John the Conqueror: all are artifacts in hoodoo magic. Given the traditional association between black cats and witchcraft, a black cat bone is also potentially a substitute for a human bone from a witch. Hoodoo lore also uses graveyard dust, soil from a cemetery, for various magical purposes. Dust from a good person's grave keeps away evil; dust from a sinner's grave is used for more nefarious magic. The use of graveyard dust may also be a symbolic appropriation of the parts of a corpse as a relic, and a form of sympathetic magic.

In any case, the rabbit's foot is dried out and preserved, and carried around by gamblers and other people who hope it will bring them luck. Rabbit's feet, either authentic or imitation, are frequently sold by curio shops and vending machines. Often, these rabbit's feet have been dyed various colours, and they are often turned into keychains. Few of these rabbit's feet carry any warranty concerning their provenance, or any evidence that the preparers even tried to comply with the rituals held to be de rigueur by the original tradition. Some may be confected from fake fur and latex "bones." President Theodore Roosevelt wrote in his autobiography that he had been given a gold-mounted rabbit's foot by John L. Sullivan as well as a penholder made by Bob Fitzsimmons out of a horseshoe. A 1905 anecdote also tells that Booker T. Washington and Baron Ladislaus Hengelmuller, the ambassador from Austria, got their overcoats confused when they were both in the White House to speak with President Roosevelt; the ambassador noticed that the coat he had taken was not his when he went to the pockets searching for his gloves, and instead found "the left hind foot of a graveyard rabbit, killed in the dark of the moon."Other newspaper stories reported the incident but omitted the detail about the rabbit's foot. In addition to being mentioned in blues lyrics, the rabbit's foot is mentioned in the American folk song "There'll Be a Hot Time in the Old Town Tonight," once popular in minstrel shows; one line goes: "And you've got a rabbit's foot To keep away de hoo-doo." Humorist R. E. Shay is credited with the witticism, "Depend on the rabbit's foot if you will, but remember it didn't work for the rabbit."