Skip to content
(appeared in "The Magnificent Seven" episode) 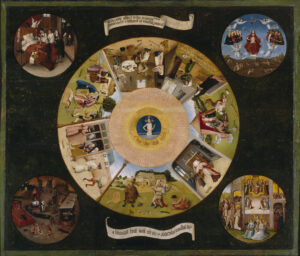 The seven deadly sins, also known as the capital vices or cardinal sins, are a classification of vices that were originally used in early Christian teachings to educate and instruct followers concerning (immoral) fallen man's tendency to sin. The Roman Catholic Church divided sin into two principal categories: "venial", which are relatively minor, and could be forgiven through any sacrament of the Church, and the more severe "capital" or mortal sin, which, when committed, destroyed the life of grace, and created the threat of eternal damnation unless either absolved through the sacrament of confession, or otherwise forgiven through perfect contrition on the part of the penitent. Beginning in the early 14th century, the popularity of the seven deadly sins as a theme among European artists of the time eventually helped to ingrain them in many areas of Christian culture and Christian consciousness in general throughout the world. One means of such ingraining was the creation of the mnemonic SALIGIA based on the first letters in Latin of the seven deadly sins: Superbia, Avaritia, Luxuria, Invidia, Gula, Ira, Acedia.
Listed in the same order used by both Pope Gregory the Great in the 6th Century AD, and later by Dante Alighieriin his epic poem The Divine Comedy, the seven deadly sins are as follows: Luxuria (extravagance, later lust), Gula (gluttony), Avaritia (greed), Acedia (sloth), Ira (wrath), Invidia (envy), and Superbia (pride). Each of the seven deadly sins has an opposite among the corresponding seven holy virtues (sometimes also referred to as the contrary virtues). In parallel order to the sins they oppose, the seven holy virtues are chastity, abstinence, temperance, diligence, patience, kindness, and humility.
The identification and definition of the seven deadly sins over their history has been a fluid process and the idea of what each of the seven actually encompasses has evolved over time. This process has been aided by the fact that they are not referred to in either a cohesive or codified manner in the Bible itself, and as a result other literary and ecclesiastical works referring to the seven deadly sins were instead consulted as sources from which definitions might be drawn. Part II of Dante's Divine Comedy, Purgatorio, has almost certainly been the best known source since the Renaissance.
Lust (Latin, luxuria)

Lust is usually thought of as involving obsessive or excessive thoughts or desires of a sexual nature. Unfulfilled lusts sometimes lead to sexual or sociological compulsions and/or transgressions including (but obviously not limited to) sexual addiction, adultery, bestiality, and rape. Dante's criterion was "excessive love of others," which therefore rendered love and devotion to God as secondary. In Purgatorio, the penitent walks within flames to purge himself of lustful/sexual thoughts.

Derived from the Latin gluttire, meaning to gulp down or swallow, gluttony is the over-indulgence and over-consumption of anything to the point of waste. In the Christian religions, it is considered a sin because of the excessive desire for food, or its withholding from the needy.

Depending on the culture, it can be seen as either a vice or a sign of status. Where food is relatively scarce, being able to eat well might be something to take pride in (although this can also result in a moral backlash when confronted with the reality of those less fortunate). Where food is routinely plentiful, it may be considered a sign of self control to resist the temptation to over-indulge.
Medieval Church leaders (e.g., Thomas Aquinas) took a more expansive view of gluttony (Okholm 2000), arguing that it could also include an obsessive anticipation of meals, and the constant eating of delicacies and excessively costly foods. He went so far as to prepare a list of six ways to commit gluttony, including:

Greed is, like Lust and Gluttony, a sin of excess. However, Greed (as seen by the Church) is applied to the acquisition of wealth in particular. St.Thomas Aquinas wrote that Greed was "a sin against God, just as all mortal sins, in as much as man condemns things eternal for the sake of temporal things." In Dante's Purgatory, the penitents were bound and laid face down on the ground for having concentrated too much on earthly thoughts. "Avarice" is more of a blanket term that can describe many other examples of sinful behavior. These include disloyalty, deliberate betrayal, or treason, especially for personal gain, for example through bribery. Scavengingand hoarding of materials or objects, theft and robbery, especially by means of violence, trickery, or manipulationof authority are all actions that may be inspired by greed. Such misdeeds can include Simony, where one profits from soliciting goods within the actual confines of a church.

More than other sins, the definition of Sloth has changed considerably since its original inclusion among the seven deadly sins. In fact it was first called the sin of sadness. It had been in the early years of Christianity characterized by what modern writers would now describe as melancholy: apathy, depression, and joylessness — the last being viewed as being a refusal to enjoy the goodness of God and the world He created. Originally, its place was fulfilled by two other aspects, Acedia and Sadness. The former described a spiritual apathy that affected the faithful by discouraging them from their religious work. Sadness (tristitia in Latin) described a feeling of dissatisfaction or discontent, which caused unhappiness with one's current situation. When St. Thomas Aquinas selected Acedia for his list, he described it as an "uneasiness of the mind," being a progenitor for lesser sins such as restlessness and instability. Dante refined this definition further, describing Sloth as being the "failure to love God with all one's heart, all one's mind and all one's soul." He also described it as the middle sin, and as such was the only sin characterised by an absence or insufficiency of love. In his Purgatorio, the slothful penitents were made to run continuously at top speed.

The modern view of the vice, as highlighted by its contrary virtue zeal/diligence, is that it represents the failure to utilize one's talents and gifts. For example, a student who does not work beyond what is required (and thus fails to achieve his or her full potential) could be labeled 'slothful'.

Current interpretations are therefore much less stringent and comprehensive than they were in medieval times, and portray Sloth as being more simply a sin of laziness or indifference, of an unwillingness to act, an unwillingness to care (rather than a failure to love God and His works). For this reason Sloth is now often seen as being considerably less serious than the other sins, more a sin of omission than of commission.

Wrath may be described as inordinate and uncontrolled feelings of hatred and anger. These feelings can manifest as vehement denial of the truth, both to others and in the form of self-denial, impatience with the procedure of law, and the desire to seek revenge outside of the workings of the justice system (such as engaging in vigilantism) and generally wishing to do evil or harm to others. The transgressions borne of vengeance are among the most serious, including murder, assault, and in extreme cases, genocide. Wrath is the only sin not necessarily associated with selfishness or self interest (although one can of course be wrathful for selfish reasons, such as jealousy). Dante described vengeance as "love of justice perverted to revenge and spite".

Like Greed, Envy is characterized by an insatiable desire; they differ, however, for two main reasons. First, Greed is largely associated with material goods, whereas Envy may apply more generally. Second, those who commit the sin of Envy desire something that someone else has which they perceive themselves as lacking. Dante defined this as "love of one's own good perverted to a desire to deprive other men of theirs." In Dante's Purgatory, the punishment for the envious is to have their eyes sewn shut with wire, because they have gained sinful pleasure from seeing others brought low. Thomas Aquinas described Envy as "sorrow for another's good"

In almost every list Pride is considered the original and most serious of the seven deadly sins, and indeed the ultimate source from which the others arise. It is identified as a desire to be more important or attractive than others, failing to give compliments to others though they may be deserving of them, and excessive love of self (especially holding self out of proper position toward God). Dante's definition was "love of self perverted to hatred and contempt for one's neighbor." In Jacob Bidermann's medieval miracle play, Cenodoxus, Pride is the deadliest of all the sins and leads directly to the damnation of the famed Doctor of Paris, Cenodoxus. In perhaps the most famous example, the story of Lucifer, Pride was what caused his Fall from Heaven, and his resultant transformation into Satan. Vanity and Narcissism are prime examples of this Sin. In the Divine Comedy, the penitent were forced to walk with stone slabs bearing down on their backs in order to induce feelings of humility.