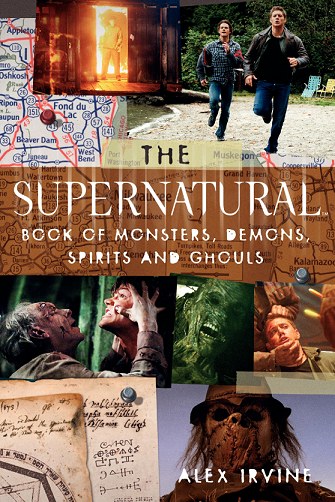 Fans of the blockbuster television phenomenon can rejoice! A one-of-a-kind compilation of all of Sam and Dean's demon-busting knowledge, The Supernatural Book of Monsters, Spirits, Demons, and Ghouls contains illustrations and detailed descriptions that catalogue the more than two dozen otherworldly enemies that most people believe exist only in folklore, superstition, and nightmares:vampires, ghosts, revenants, reapers, and even bloody clowns. You'll find within these pages Sam and Dean's notes, observations, and memories interwoven with sections of John Winchester's invaluable journal, making this book the perfect companion to every thrilling episode—and an essential weapon in the secret war against the hidden creatures of the darkness!

The book is didvided into several sections

as well as two appendi on "Herbs, Oil and Hoodoo Hands" and "Names and Attributes of European Demons" It's written from the POV of Sam and Dean, although this seems problematic, as the POV changes aren't evident - it's more like Sam and Dean are one being, thus one story teller. Fans of the series might feel that the POVs aren't a hundred percent perfect either when it comes to sentence structure and wording. The Supernatural Book of Monsters, Spirits, Demons and Ghouls gives information on various supernatural beings the boys have encountered, mainly giving a summary of the events in canon, sometimes fleshing it out with background information, often in the form of texts from John's journal. These texts taken from John's journal are obviously more coherent than the ones used on the show, to make them better understandable. As with Origins, this tie-in novel also struggles with a few minor contradictions: e.g.: It's set somewhere before episode 2.20 - What is and What should never Be, as it doesn't mention their encounter with a djinn, nor the events in the season finale, still, Sam and Dean mention things that happened in Season 1, e.g. the water spirit in episode 1.03 at Lake Manitoc as having happened "...a few years back". Furthermore, a couple of small details are slightly off (Dean is four when Mary died, not five.)