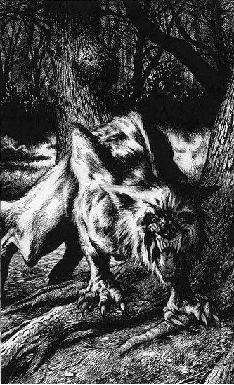 Werewolves, also known as lycanthropes, are mythological or folkloricpeople with the ability to shapeshift into a wolf or wolflike creature, either purposely, by using magic, or after being placed under a curse. The medieval chronicler Gervase of Tilbury associated the transformation with the appearance of the full moon; however, there is evidence that the association existed among the Ancient Greeks, appearing in the writings of Petronius. This concept was rarely associated with the werewolf until the idea was picked up by fiction writers.
Shape-shifters similar to werewolves are common in tales from all over the world, though most of them involve animal forms other than wolves.
Werewolves are a frequent subject of modern fictional books and films, although fictional werewolves have been attributed traits distinct from those of origina folklore, most notably the vulnerability to silver bullets.
Becoming a Werewolf

Historical legends describe a wide variety of methods for becoming a werewolf, one of the simplest being the removal of clothing and putting on a belt made of wolfskin, probably as a substitute for the assumption of an entire animal skin (which also is frequently described). In other cases, the body is rubbed with a magic salve.To drink water out of the footprint of the animal in question or to drink from certain enchanted streams were also considered effectual modes of accomplishing metamorphosis. Olaus Magnus says that the Livonian werewolves were initiated by draining a cup of specially prepared beer and repeating a set formula. Ralston in his Songs of the Russian People gives the form of incantation still familiar in Russia. According to Russian lore, a child born on December 24 shall be a werewolf. Folklore and literature also depict that a werewolf can be spawned from two werewolf parents.

In Galician, Portuguese, and Brazilian folklore, it is the seventh of the sons (but sometimes the seventh child, a boy, after a line of six daughters) who becomes a werewolf (Lobisomem). In Portugal, the seventh daughter is supposed to become a witch and the seventh son a werewolf; the seventh son often gets the Christian name"Bento" (Portuguese form of "Benedict", meaning "blessed") as this is believed to prevent him from becoming a werewolf later in life. In Brazil, the seventh daughter become a headless (replaced with fire) horse called "Mula-sem-cabeça" (Headless Mule). The belief in the curse of the seventh son was so widespread in Northern Argentina (where the werewolf is called the lobizón), that seventh sons were frequently abandoned, ceded in adoption, or killed. A 1920 law decreed that the President of Argentina is the official godfather of every seventh son. Thus, the State gives a seventh son one gold medal in his baptism and a scholarship until his twenty first year. This effectively ended the abandonments, but there still persists a tradition in which the President godfathers seventh sons.

In other cases, the transformation was supposedly accomplished by Satanic allegiance for the most loathsome ends, often for the sake of sating a craving for human flesh. "The werewolves", writes Richard Verstegan(Restitution of Decayed Intelligence, 1628), "are certayne sorcerers, who having annoynted their bodies with an ointment which they make by the instinct of the devil, and putting on a certayne inchaunted girdle, does not only unto the view of others seem as wolves, but to their own thinking have both the shape and nature of wolves, so long as they wear the said girdle. And they do dispose themselves as very wolves, in worrying and killing, and most of humane creatures." Such were the views about lycanthropy current throughout the continent of Europe when Verstegan wrote.

The power of transforming others into wild beasts was attributed not only to malignant sorcerers, but to Christian saints as well. Omnes angeli, boni et Mali, ex virtute naturali habent potestatem transmutandi corpora nostra ("All angels, good and bad have the power of transmutating our bodies") was the dictum of St. Thomas Aquinas. St. Patrick was said to have transformed the Welsh king Vereticus into a wolf; St. Natalis supposedly cursed an illustrious Irish family whose members were each doomed to be a wolf for seven years. In other tales the divine agency is even more direct, while in Russia, again, men are supposedly become werewolves when incurring the wrath of the Devil.

A notable exception to the association of Lycanthropy and the Devil, comes from a rare and lesser known account of a man named Thiess. In 1692, in Jurgenburg, Livonia, Thiess testified under oath that he and other Werewolves were the Hounds of God. He claimed they were warriors who went down into hell to do battle with witches and demons. Their efforts ensured that the Devil and his minions did not carry off the abundance of the earth down to hell. Thiess was steadfast in his assertions, claiming that Werewolves in Germany and Russia also did battle with the devil's minions in their own versions of hell, and insisted that when werewolves died, their souls were welcomed into heaven as reward for their service. Thiess was ultimately sentenced to ten lashes for Idolacy and superstitious belief.

A distinction is often made between voluntary and involuntary werewolves. The former are generally thought to have made a pact, usually with the Devil, and morph into werewolves at night to indulge in mischievous acts. Involuntary werewolves, on the other hand, are werewolves by an accident of birth or health. In some cultures, individuals born during a new moon or suffering from epilepsy were considered likely to be werewolves.