Dean figures out that it may be possible to defeat Chuck thanks to remembering that there were conditions mentioned in the demon tablet about what to do with angels and demons if God were not around to keep them in line. They enlist Donatello to help translate. Donatello tells them that the only one who can help is the "favorite son" who was Michael at the time the tablet was recorded. Sam and Dean and Cas travel to hell to find Michael in the cage (since it was AU Michael who was killed by Jack) and find that not only is Rowena, who IS dead, queen of hell, but Michael was released when Chuck released all the souls from hell. Michael, still in the body of third Winchester brother Adam, is roaming the earth; trying to re-adjust to all that has changed. Cas captures Michael and brings him back to the bunker where they appeal for his help. Eventually, after Cas shows Michael all the bad things God has been up to, Michael agrees to help them take down God by giving them a spell. One of the ingredients in the spell is only found in purgatory. Michael opens the portal to purgatory and Dean and Cas consider stepping through. Dean also lets Michael leave after he hands over the God-destroying spell. Meanwhile, Sam and Eileen have left the bunker to help another hunter with a vampire problem but the hunter turns out to be Chuck only disguised as the hunter; only out to lure them out of the bunker and, it appears, get Sam alone.

Our Father Who Aren't in Heaven (full recap) 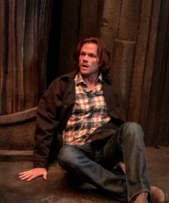 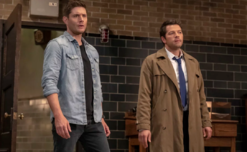 Discuss "Our Father Who Aren't in Heaven" here!