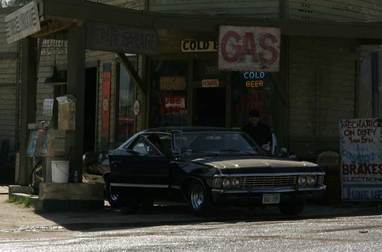 Dean's beloved car is a 1967 Chevy Impala. It is black, has four doors and the license plate is KAZ 2Y5. There is a cassette player and radio in the car, along with Dean's collection of "Mullet Rock" cassettes. There is a secret compartment in the trunk of the Impala that contains many of the weapons the boys use. There is also a large box of things sitting in the back of the car that was given to them by Jenny - the woman who moved into their old family house. The box contains family photos and other items that were saved from the fire. Despite being hit and near-destroyed by an articulated truck, Dean successfully restored the car to its near-perfect condition, thanks, presumably, to Bobby Singer's auto salvage yard. The car originally belonged to John Winchester, but he gave it to Dean some time before he went missing in Jericho. Due to the current "wanted" status of the boys, they have had to change the license plate on the impala. It is now CNK 80Q3.

John Winchester drives a black 2-door 1986 GMC Sierra Grande. The box is covered and contains a very complete weapons trunk. The central console in the front of the cab contains a number of false ID cards. The last time the truck was seen was outside the warehouse that the Demon lured John to. The tires had all been slashed, so the truck was presumably left there. Since John's death, it is unclear what has happened to the truck. 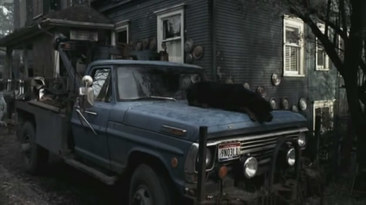 Bobby drives a 1968 Ford F-350 with Lawrence County, South Dakota plates - 9NO3L1. He also drives a 1971 Chevelle which has a Devil's Trap in the trunk. you can see his dog Rumsfeld on the bonnet 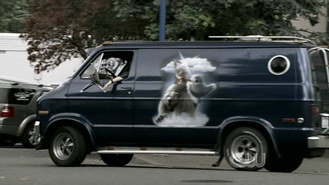 Seen in the episode Simon Said This Black Dodge Tradesman Van belonged to Andy Gallagher. On the right side, there is a painting of a Barbarian Queen riding a polar bear. The license plate is "RU-Obi-1" - a nod to Andy's obvious love of Star Wars. 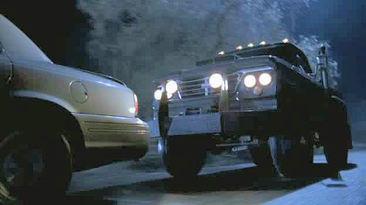 Sam's Car
In the beginning of Season 6.

Sam's car is Crushed by Castiel in Season 6: Episode 3: The Third Man. 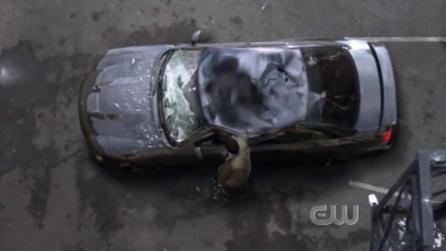 For the short while Sam's car was not crushed him and Dean use both their cars.

Supernatural Episode: "The French Mistake"
Season 6, Episode 15
Episode Synopsis: Sam and Dean are transported to an alternate universe, where they are actors on a TV show called "Supernatural" and are named Jared Padalecki and Jensen Ackles, and they must avoid an angelic hit man who is pursuing them. Original Air Date: Feb 25, 2011 (T.V. Guide.com)
In this episode Misha has a car.

Showing 3 of 3 threads for this page