More about Clap Your Hands If You Believe 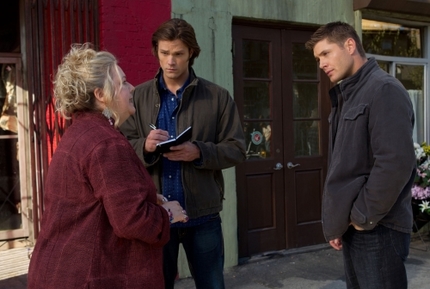 More Photos From Clap Your Hands If You Believe

More Clap Your Hands If You Believe Quotes

Clap Your Hands If You Believe Cast

ALL DOGS GO TO HEAVEN

The crystal lady tells the Winchesters that she thinks fairies are abducting first-born sons to service Oberon, to which Sam reacts by asking, "Dean ... did you service Oberon, King of the Fairies?"

Oberon and Titania are kind and queen of the fairies in William Shakespeare's A Midsummer Night's Dream.

At the end, when talking about the dwarf prosecutor that Dean tackled, Sam says "Little big man," meaning he is a little person but also a "big man" for not pressing charges. But this is also the title of a 1970 film starring Dustin Hoffman as a white man who had been raised by Indians.

Unrelated except by coincidence, Little Big Man also was the name of a respected warrior of the Oglala Lakota. He was a contemporary of Crazy Horse, opposed the treaty to take away the Black Hills from the Sioux, and fought at Little Big Horn.

Meg is back! And she'd kidnapped the Winchester brothers to find out where Crowley is. They make a deal -- they will help her find Crowley in exchange for her getting information out of the new King of Hell about getting Sam's soul back. Castiel shows up to help but finds it difficult to work with Meg.