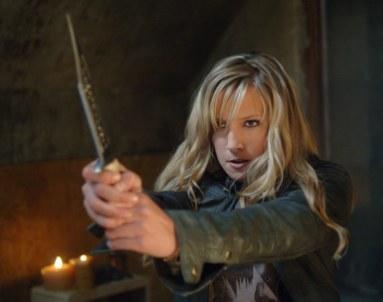 Ruby is often shown to possess a mysterious and somewhat magical "demon-killing" knife. It has been seen and utilized many times throughout the season, mainly as an instrument to kill demons. Upon being stabbed by the blade, both the demon and human host suffer immediate death. The demon possessing the human is shown to convulse violently, as if shot with the Colt. It then flickers with light before expelling a small cloud of smoke from the human body, leaving whoever it was possessing dead. The demon possessing the body then also disperses, as the knife's effects mirror that of the Colt. However, both its creation and how exactly it can kill demons has not yet been revealed.
Ruby's knife was featured prominently in the season three finale, "No Rest For The Wicked," and is currently in Sam's possession.

In 301 The Magnificent Seven, Ruby appears during the battle with the Seven Deadly Sins, and kills three of the demons with a knife. Until this point, the only way to get rid of a demon had been exorcism, which sent it back to hell, or with the Colt which killed it. Bobby states that he has never heard of a blade that could kill demons. In 309 Malleus Maleficarum, Ruby tries to use the knife to kill Tammi but loses it in the ensuing fight. Dean eventually kills Tammi with it.

The knife is based on the Bowie design, which was first made in 1830 in the United States.The handle appears to be made out of deer antler, which became common in Bowies at the time. There are glyphs on the blade which at the moment, remain illegible. An unusual trait of the knife is that rather than have a completely fine edge common to Bowie knives, the blade appears to have sawback teeth, which look like large serrations.