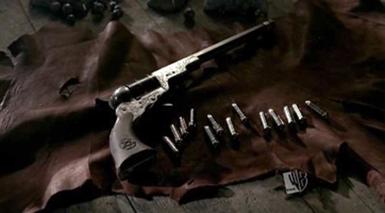 The Colt is a fictional gun in The CW Television Network's Supernatural. The Colt, and thirteen bullets for it, were made by Samuel Colt for a paranormalhunter in 1835. John Winchester claims that anythingthat is hit by one of the thirteen bullets fired from The Colt will die, including creatures that are normally immune to bullets. Entities with mortality are shown to be more resilient, which may be attributed to their state of neutrality, unless the shot itself is fatal. The bullets appear to be made of silver, and are each individually engraved with a number 1 through 13. The gun itself is a Colt Paterson revolver, albeit one that fires modern style cartridges as opposed to the "cap and ball" loading of the 1830s originals.
On the gun is inscribed the phrase, "non timebo mala" which means "I will fear no evil" referencing Psalm 23:4.

The Bullets
The 13 original bullets were made for the Colt, and it only has its supernatural killing power when used with them. Bobby, with the help of Ruby, has now made demon-killing ammunition for the Colt. It is unknown how many new bullets were created, but in one episode Dean is shown loading the Colt from a standard, 50-round box of ammo.
When the witchcraft demon stopped the bullet in mid-air and it fell to the ground, you could see runes cast into the bullet.

After the last of the bullets were used, Bobby attempted to find out how the gun worked. With the help of Ruby, he succeeds in returning the Colt to its full potential. Both Dean and Sam have sinced used the Colt effectively. According to the crossroads demon the Colt isn't the original. This may be a reference to the magic that is used to power the gun as Bobby most likely didn't have an identical, custom-made, antique revolver just hanging around.

The Colt was stolen from Dean and Sam by Bela who claims to have sold it. However, with Bela presumed deceased, its whereabouts are unknown.