E.M.F or Electro Magnetic Frequency Reader. this device reads Electro magnetic frequancies.
seen in the episodes :- Phantom Traveler, Scarecrow....
In the ep. Hell House it is mentioned that powerline transformers interfere with the device. 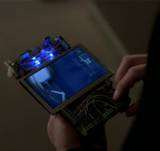 seen in the episodes :- Nightmare....
Designed to read fluctuations in temprature. Used to find hot and cold spots.

The camera has long been used to reveal psychic emenations that are not visible to the naked eye. Such as orbing.
seen in the episodes:- Asylum, ..... 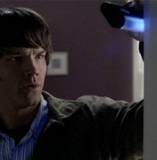 This light is used by forensic investigator's to reveal "stains" that are not visible to the naked eye. Sam uses it to reveal the writing on the back of the mirror in the episode Bloody Mary.

The laptop that the boys use is a Dell. It belongs to Sam. in the episode Tall Tales Sam tells dean not to mess with his computer. Although they both use it.

Sam's phone is a Palm Treo 650.
It is a camera phone that he uses to take photos of the symbols on the wall of the Hell House and can also be used to retrieve and send emails. His email address is lawboy@stanford.edu