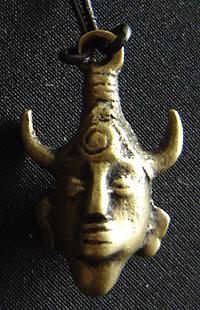 In a flashback during 308 A Very Supernatural Christmas, we find out that ten year old Sam obtained the amulet from Uncle Bobby, who said it was 'real special'. Sam intends it as a Christmas present for John. But when John doesn't make it home for Christmas, and after finding out that John has lied to him about his mother's death and hunting, Sam gives it to Dean.
The amulet depicts a humanoid head with bull-like horns (pointing upwards), rather than ram-like horns (pointing down).
The amulet is apparently an "egyptian safety symbol"