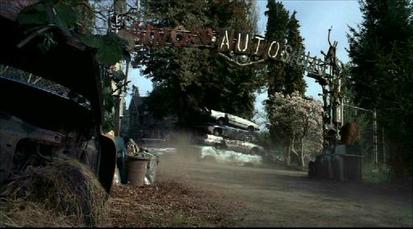 The salvage yard is owned and run by Bobby Singer. Bobby is an old friend of John Winchesterand helps his two sons Dean and Sam Winchester out. The salvage yard serves as somewhat of a safe haven in the episode "Devil’s Trap" until Meg Masters shows up. The three hunters set a trap for Meg, and she dies there. As of the episode "Born Under a Bad Sign", Bobby resides in Lawrence County, South Dakota where Meg, who was possessing Sam, tries to kill him but fails. Meg's intangible demonic essence then escapes through the fireplace and into the unknown. In the episode "All Hell Breaks Loose, Part 2", Bobby and the newly revived Sam along with Dean meet to determine what's been happening in southern Wyoming. Featured once again in season 3's "Dream a Little Dream of Me", it appears that an undisclosed time before Bobby became a hunter, both the interior and exterior of the house had a much more decent look. it also appears that on the land that the salvage yard occupies was once wide open fields. After Bobby's wife died, he stopped maintaining the appearance of the house, letting it become cluttered with demonic traps and books on the occult, and both sold off most of his land to developers, turning what little he had left into an auto salvage yard.

Season 3 -"Dream a Little Dream of Me"